PUBG Mobile Club Open 2020 is going on full action this time. The India Spring Split Group Stage rounds are now complete. All the 32 teams took part in it, and played individual games and earned match points. After playing all the matches during the 6-day session of the Spring Split Group stage, they have been cut off to 24 teams. The 8 teams with the lowest point got eliminated from the tournament and now it is time for Semi-Finals. 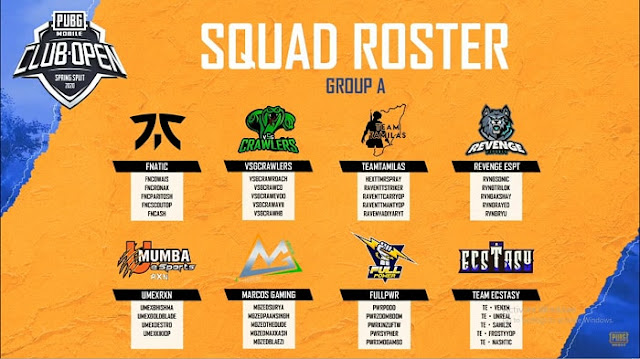 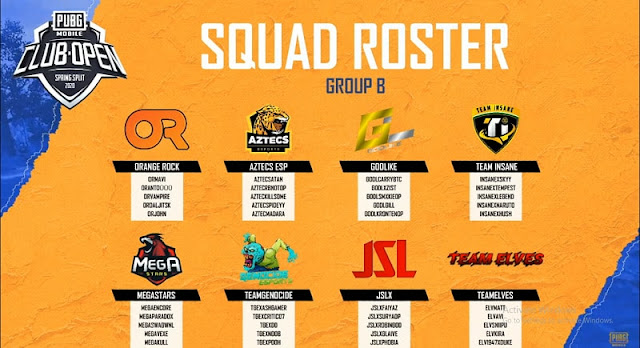 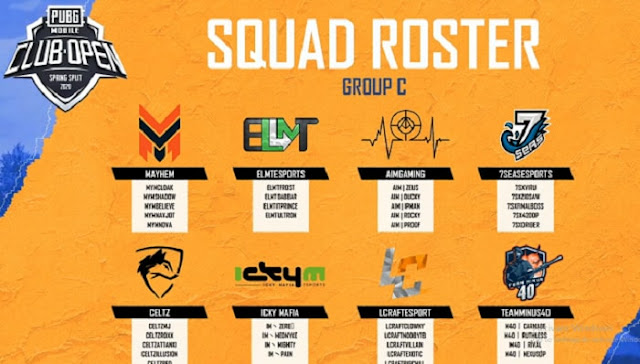 The point distribution system is the same as it was before in Group Stage matches. The team gets Chicken dinner will get 20 points. 2nd place will get 14 points and 10 points for third place in the matches. The rest of the info is given on the chart below. Also, every team will get 1 point added for one kill. 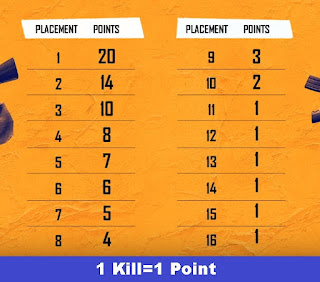 1st day of the PMCO semi-final was scheduled between Group A and Group B. Both the group played the classic Erangel game. All the 16 teams engaged their fights for a better result. Check the results and scoreboard below-
Day 1 Match [email protected]: TeamGenocide won the Chicken Dinner on the first match at Erangel with 9 kills and 26 points. 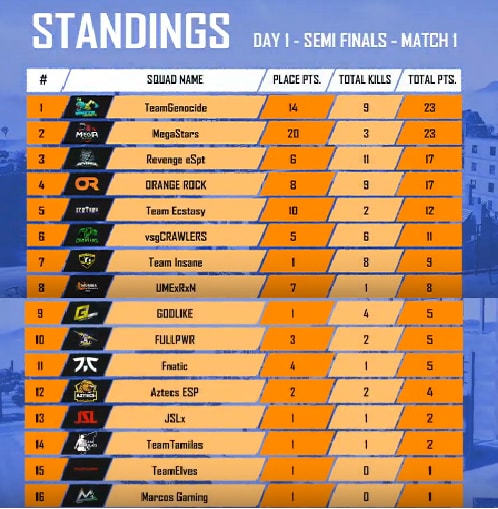 Day 1 Match [email protected]: Marcos Gaming had the chicken on the 2nd match at Sanhok Map with 16 kills and 36 game points. 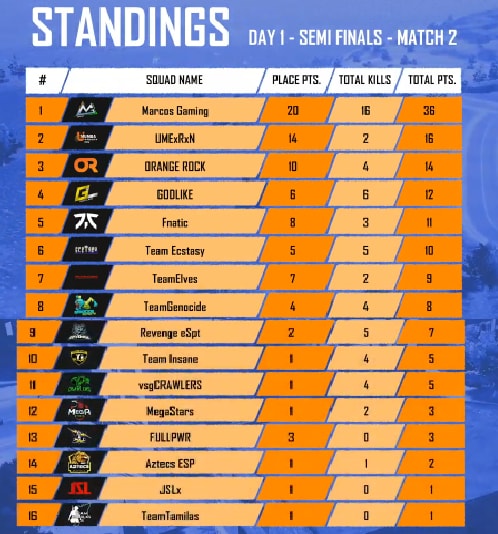 Day 1 Match [email protected]: The 3rd match on the first day of Semi-final was in Vikendi map and it was won by Marcos Gaming with 10 kills and 30 points 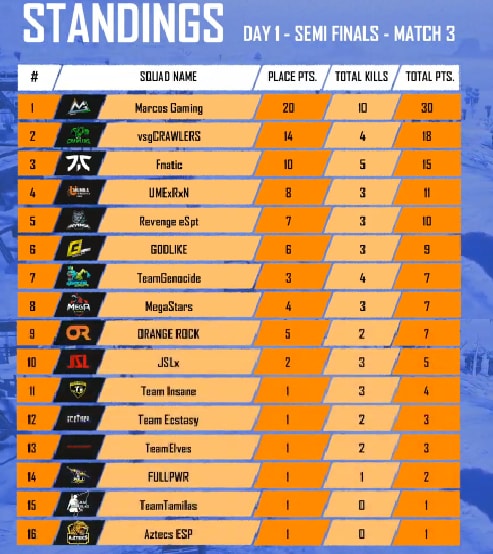 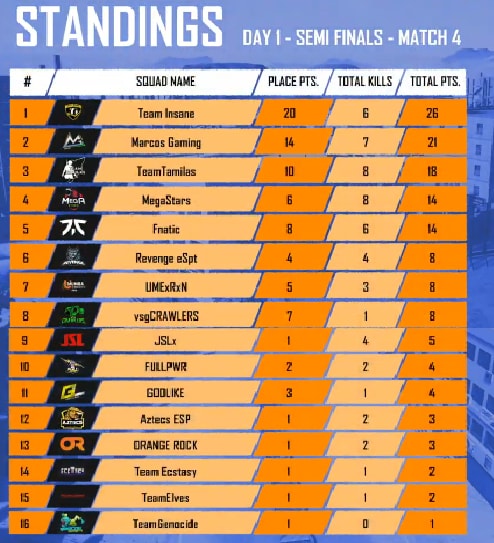 After the 4 matches, Marcos Gaming got 2 chicken dinners on the first day of PMCO Spring Split Semi-final and secured the 1 st place on Day 1 overall result. MegaStars came on 2nd place with one chicken dinner, 16 total kills, and  47 total points. Fnatic got 3rd place with 15 total kills and 45 game points. The rest of the result reports are given below in the photo figure. 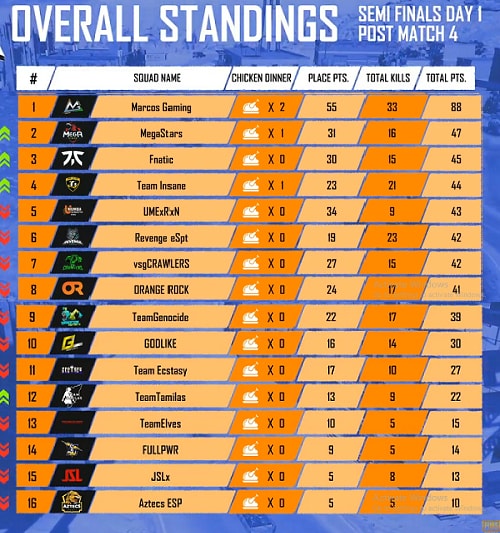 PUBG Mobile India Semi-Final Day 2 tournament happened in between Group B and Group C. Each group with 8 teams participated in all the classic tournament matches on the 2nd day of Semi-final. Match results and scoreboard details are given below-
Day 2 Match [email protected]: Icky Mafia secured 1st place with 7 kills and 27 points. Marcos gaming came in second place with 19 points, and Celtz got third place with 19 points. 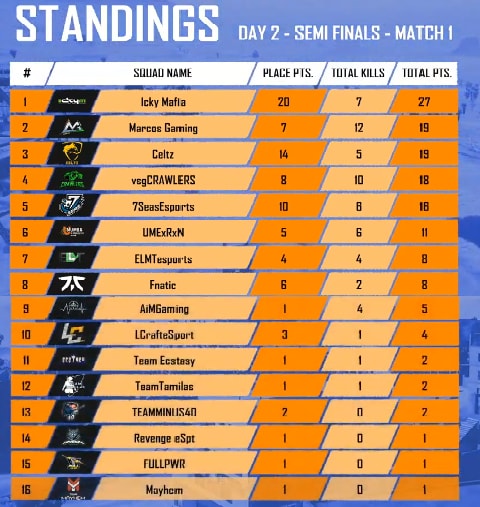 Day 2 Match [email protected]: UMExRxN got the chicken dinner with 4 kills at Sanhok. ELMTesports came in 2nd place with 23 points and AimGaming came in 3rd place with 18 points. 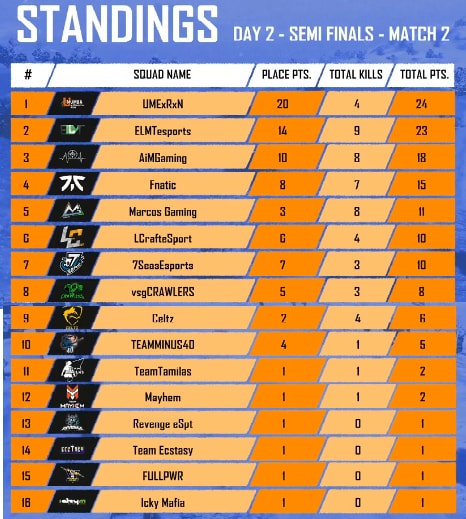 Day 2 Match [email protected]: Team Ecstasy got the chicken dinner with 7 total kills on Miramar. Revenge Espt came in 2nd with 23 points and FullPWR came in 3rd with 15 points. 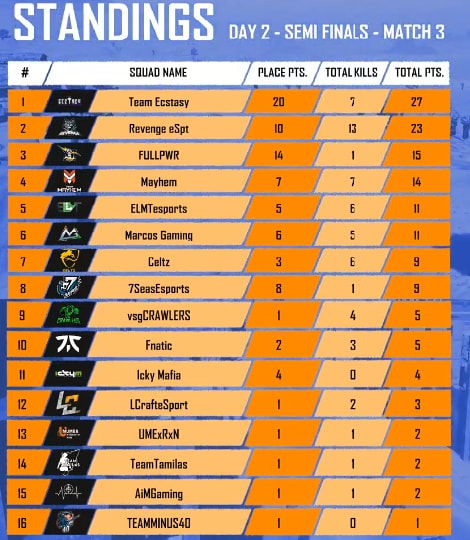 Day 2 Match [email protected]: This was the last match on Erangel. 7SeasEsports won the winner-winner chicken dinner with 11 total kills and 21 points. ELMTesports came in 2nd with 23 points and vsgCRAWLERS secured the 3rd place with 13 points. 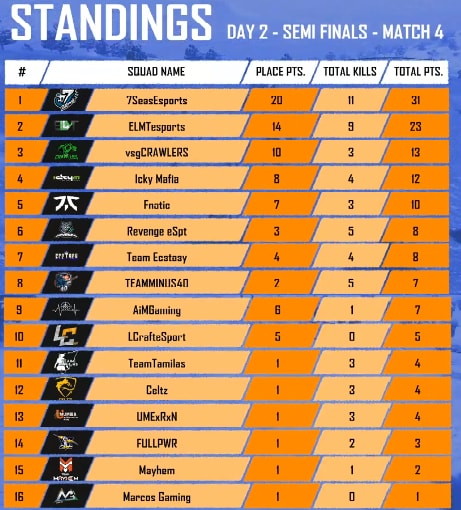 On the second day, all the 24 teams completed their 8 matches and collected points according to their performances Semi-Final Day 2. Marcos Gaming from group A got two chicken dinners and came in first in 2nd-day overall standing results. VSGCrawlers got the 2nd standing with 35 total kills and 86 points. The rest of the result for PMCO Semi-final Day 2 overall standing are given below on the photo figure- 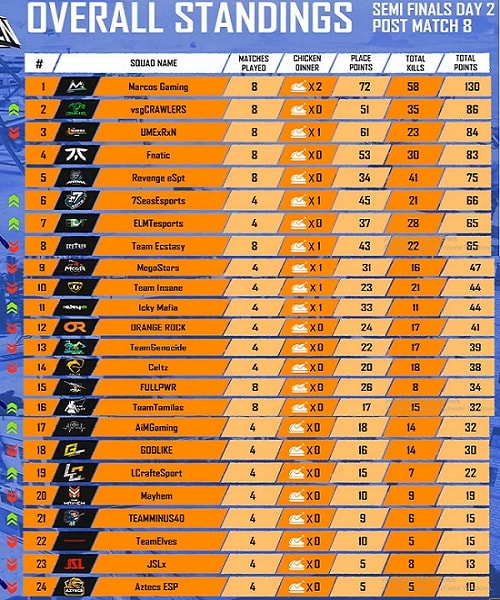 PMCO India Semi-Finals Day 3 was streamed live on the Official Youtube channel of PUBG Mobile Esports on 15 February. This 3rd day of the esports tournament was held between group B and Group C. All teams played 4 matches. According to the schedule of 3rd Day semi-final, the first match will be on Erangel, 2nd match on Sanhok, 3rd match on Vikendi, and 4th match will take action on Erangel once again. The match results and scoreboard reports and given below-

Schedule: Group B Vs Group C

Day 3 Match [email protected]: TeamGenocide won the chicken dinner on the 1st match of day 3rd with 10 kills. Celtz placed in second with 12 kills and 20 points, and Aztecs ESP holding the 3rd place. 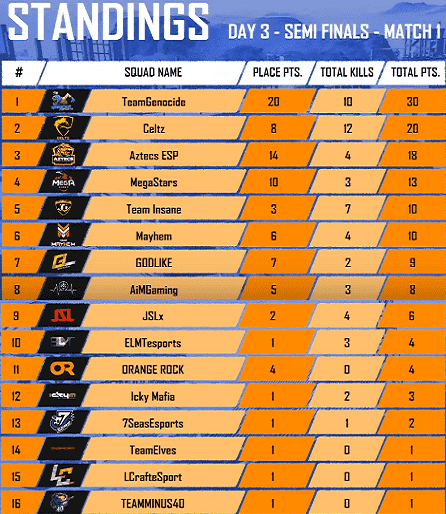 Day 3 Match [email protected]: On the 2nd match, LCrafteSport got 10 kills with chicken dinner in Sanhok map. 7SeasEsports got second highest with 25 points and Team elves came in 3rd with 13 points. 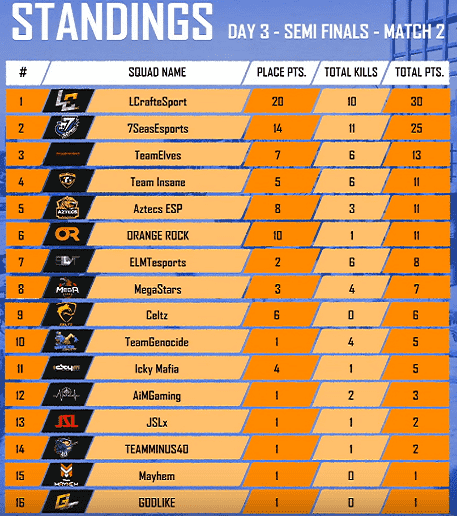 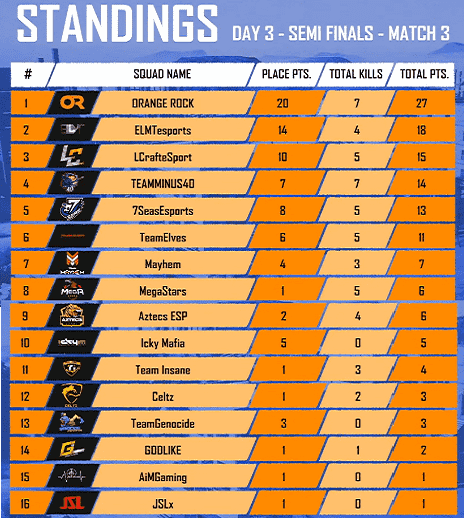 Day 3 Match [email protected]: ELMTesports got won this match at Erangel with 16 total kills. After Mayhem got 20 points and 3rd highest goes to GODLIKE. 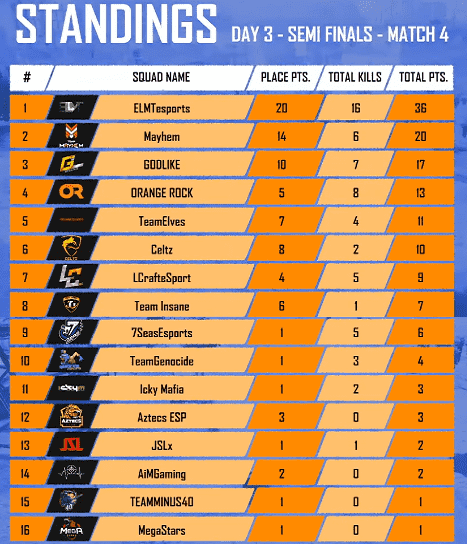 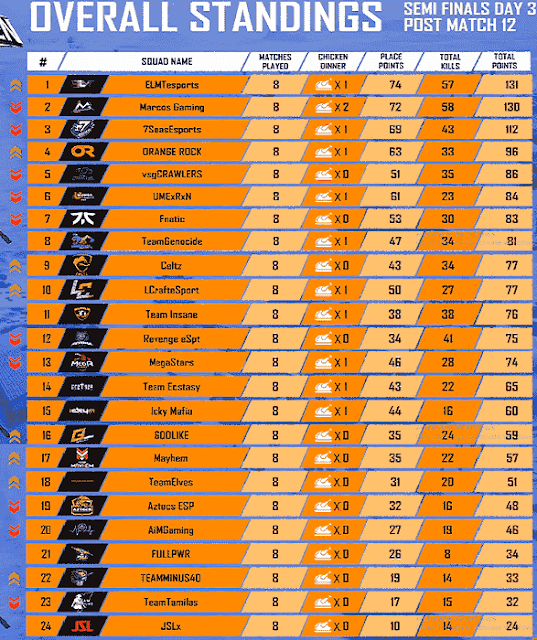 The 4th day of PMCO Spring Split India Semi-finals was streamed live on Youtube on 16th February. This day 4 tournament was scheduled with 4 matches between Group A and Group B. All the 16 teams played 4 matches and secured their position for upcoming matches. The tournament results and Match reports are given below-
Schedule: Group A Vs Group B
Day 4 Match [email protected]: Team Tamilas got the first place on the first match. Megastars came in 2nd, and Team Insane came in 3rd position. 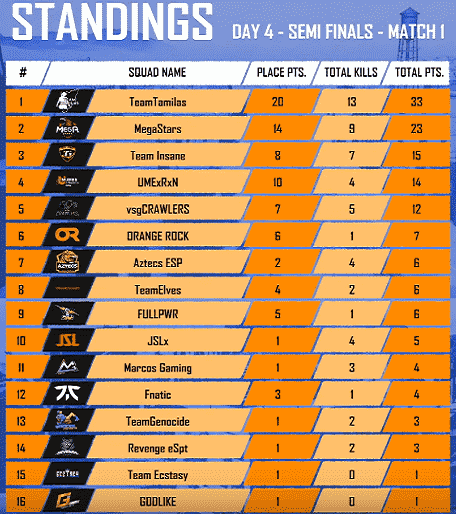 Day 4 Match [email protected]: GodLike came in first place with 26 points and 6 kills. Fnatic got 2nd position with 10 kills and Megastars got 5 kills in this match. 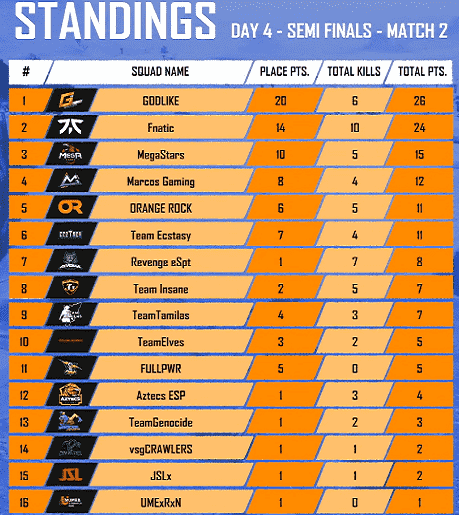 Day 4 Match [email protected]: First place secured by Megastars, and TeamTamilas came in 2nd place and OrangeRock got the 3rd position in this match at Miramar. 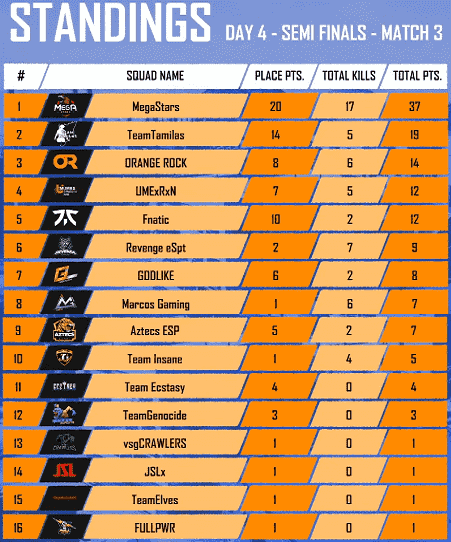 Day 4 Match [email protected]: At the last match on Day 4 PMCO Semi-finals Aztects ESP came in 1st with 8 kills, TeamTamilas got 2nd place with 19 total kills, and GODLIKE came in third with 3 kills at Erangel. 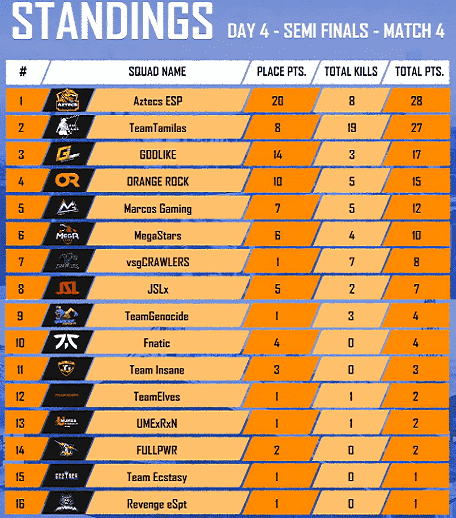 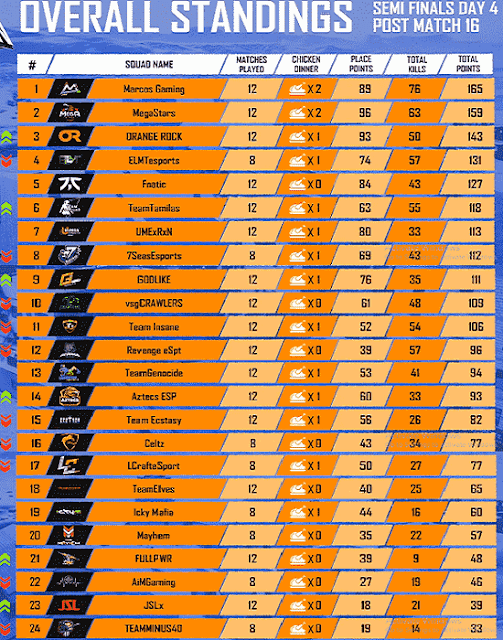